“Danny Bernardo is adorable as all get out as former best pal and one time lover, Harry…”
– Alisa Hayashida, South Pasadenan 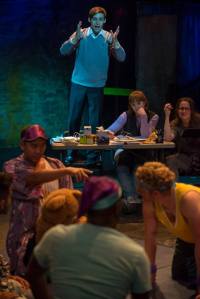 Season on the Line (The House Theatre of Chicago)

RECOMMENDED! “A terrific opportunity to watch two highly likable and energetic Chicago actors, Danny Bernardo and Jacob A. Ware practicing their craft. Their camaraderie is highly charged and intense, both physically and emotionally and both actors reveal an impressive range while staying honest to the moments of the piece. ..it’s a nice opportunity to see two young Chicago bucks flex their acting muscles.” –Joe Stead, Steadstyle Chicago

HIGHLY RECOMMENDED! The show is most poignant when Scooter and Dennis, young blood brothers, plot on a secret cliff. Though actors Danny Bernardo and Jacob Ware play out this memory atop a shaky twin bed, I found myself fearing for their characters, teetering on the precipice of their lethal immaturity.” –Marissa Oberlander, Chicago Reader

“There are some real riches in this cast..The moment I most enjoyed at Friday nights show was A Bowler Hat, performed by a young actor named Danny Bernardo (whom I last saw as Aladdin at Emerald City and who is surely on his way up).” –Chris Jones, Chicago Tribune

“The story unfolds passionately through the eyes of two characters: a traditional samurai, played with understated finesse by Danny Bernardo, and Kent Haina, Jr. as a meek fisherman who evolves into a fierce anti-American warrior.” –Colin Douglas, Centerstage Chicago

“The cast is likeable and dedicated…exceptional performances by Danny Bernardo, as Kayama Yesaemon, and David Rhee, as The Reciter. Bernardo is warm and accessible, wonderfully portraying the transformation from simple citizen to corrupted bureaucrat.” –Venus Zarris, Chicago Stage Review 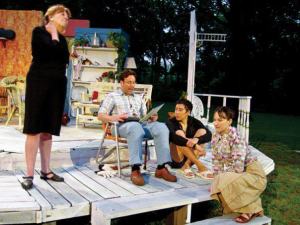 “Director Michael Weber has done a great job of building on Wilson’s strengths, packing this production with fine actors who know how to plumb the script’s depths. Danny Bernardo and Rebekah Ward-Hays are particularly good at this, playing a main character’s patient, long-suffering lover and a druggy demi-celebrity who learns to stand up for herself.” –Jack Helbig, Chicago Reader

“Danny Bernardo is a serene Jed, his devoted horticulturist lover who nurtures Ken as lovingly as he does his plants… 5th of July is an ensemble work, and the entire cast is dynamic.” –Doug Deuchler, Oak Park Wednesday Journal

“Eric Martig and Danny Bernardo prove to be physical chameleons. Their various postures and changes in corporal presence are crucial in the audiences understanding of social class and importance in this distant land.” –A. Sic, Buzz Magazine

“Danny Bernardo manages to find complex emotions in even vapid songs. Feder and Bernardo’s reenactment of their characters’ performances at an overnight camp brought down the house.” –Jennifer Vanasco, Chicago Reader 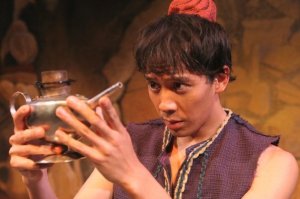